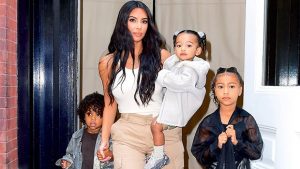 Kim Kardashian and Kanye West’s children — daughters North, 8, and Chicago, 3, plus sons Saint, 5½, and Psalm, 2 — were also in attendance.

Kim Kardashian is showing her support for Kanye West amid their divorce.

On Thursday, the Keeping Up with the Kardashians alum, 40, made a surprise appearance at the Mercedes Benz Stadium in Atlanta to celebrate the release of Kanye’s 10th studio album, Donda.

Kardashian’s four children with the 44-year-old rapper — daughters North, 8, and Chicago, 3, plus sons Saint, 5½, and Psalm, 2 — were also spotted in the crowd for the occasion, as well as sister Khloé Kardashian.

For the family outing, Kim rocked a red jumpsuit and completed her look with matching boots.

Meanwhile, Kanye appeared to coordinate with the SKIMs founder in red full snowsuit of his own. He added Yeezy 1020 boots to his look and wore a stocking-like mask over his face.

Other attendees at the listening party, which was livestreamed on Apple Music, included stars like Shaquille O’Neal, CeeLo Green, Big Boi and Jadakiss.

DONDA is named after Kanye’s late mother Donda West, who died at the age of 58 following plastic surgery complications in 2007. The album is Kanye’s first since Kim filed for divorce from him in February after six years of marriage.

At the time, an insider told PEOPLE that Kim — who began dating West in 2012 and later wed in 2014 — never wanted the 22-time Grammy winner to be removed from their kids’ lives and “has made it clear that Kanye can talk to his children anytime he wants.” 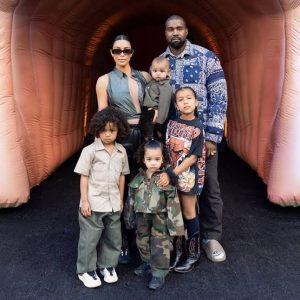 “Happy Father’s Day to all the amazing dads in our lives! Love you unconditionally!!!” she wrote on her Instagram.

As they continue to navigate their divorce, Kim and Kanye appear to be a united front as co-parents. According to reports earlier this week that the former couple have been spending some family time with their kids.

“Kanye has accepted that Kim wants a divorce,” the insider said. “For a long time, it was very hard for him. He was disappointed. He has come around though.”

Since his split from Kardashian, Kanye has been linked to model Irina Shayk.

In June, the pair were spotted together celebrating Kanye’s birthday in France. At the time, a source told PEOPLE that the duo has “known each other professionally for years” but Kanye “started pursuing [Shayk] a few weeks ago.”

Last week, following reports that they were cooling off, reports have it that the Kanye and Shayk, 35, are “very much still dating.”

Last week, following reports that they were cooling off, a source revealed that the Kanye and Shayk, 35, are “very much still dating.”

As for Kim, she “is fine with Kanye dating,” according to a source. “She just wants him to be happy.”