Not only did Arinze Onyisi beg men to rape women whose mode of dressing they consider indecent (read here), he went further to ask them to do it “raw”. 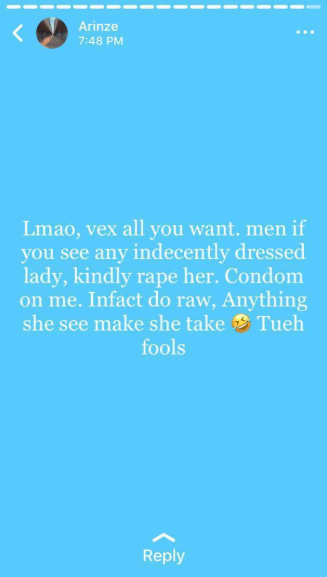 His post generated massive outrage but he remained adamant and kept defending his vile statement. 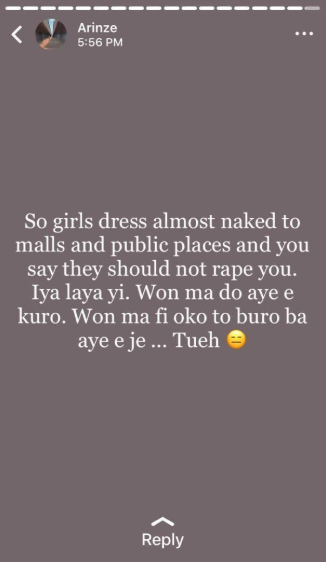 Michelle Dede, an actor and an advocate against sexual abuse, saw his post and reacted to it. in her reply to the post, she educated him, chastised him, then warned him about the end that awaits rapists.

Following Michelle’s post, Mirabel Centre, a Sexual Assault Referral Centre, revealed that Arinze has been reported to the appropriate authorities.

Dear @arinzeonyisi I use the term Dear very sarcastically in this caption. I’m not someone who ousts people on insta when they rip me off or upset me. However, as someone who advocates against sexual abuse, your case is unacceptable! Someone posted your what’s app stories in their insta stories & it was circulated, till I was tagged a short while ago. My initial reaction was to call someone so I could get you arrested. Instead, I’ve decided to attempt to educate you, in the hope that this form of public RE-education will be a permanent deterrent to you & a reminder that many now know who you are. 1. Rape Is Not And Will Never Be Acceptable! 2. I don’t know how old you are, nor do I care, because from your posts I can only conclude that You Lack The Emotional And Mental Intellect to know that Rape Is Wrong, if you did you would never have posted what you did. 3. There are black & white areas when it comes to many things in life, but not in the case of rape! 4. Rape Is A Crime. Forcing someone to have sex against their will is an offence. 5. Following the recent arrests of the two men who raped/video taped the rape of a woman in a hotel room & ARE NOW BOTH IN POLICE CUSTODY, only a fool would type, share what you did via any form of social media. 6. Read 1-5 again, then ask yourself slowly Am I Arinze A Fool? 7.There are orgs like @standtoendrape@mirabelcentreng @cece_yara@projectalertvawng @warif_ng@nomore234ng who devote their time to help survivors & victims parents get justice from abusers, they & other orgs/individuals have successfully gotten rapists convicted. Hundreds of women, girls & boys lives are ruined after they have been abused. Many do not survive, many go on to battle years of emotional & mental trauma as a result of rape, yet you post about it as a joke! I fear for the women and models you work with now!. 8.There Is Nothing Funny About Rape! 9. A woman wearing a short skirt does not cause rape! Neither does a woman who is covered in a hijab who gets raped, nor does a two month old baby or a ten year old boy! 10. Rape Is Caused By Rapists.11. Let me also remind you of what usually happens to convicted rapists, they end up in jail. They are sexually abused/ beaten by other inmates. I doubt Kiriri would be a nice holiday location.
12. As you have suddenly made your private public from public and posted an apology, I hope these points above will assist you with further “Learning” right from wrong. P.s @arinzeonyisi . I see you are following me, considering the kinds of advocacy posts I have posted and will continue to, unfollowing me would be a good idea at this point. 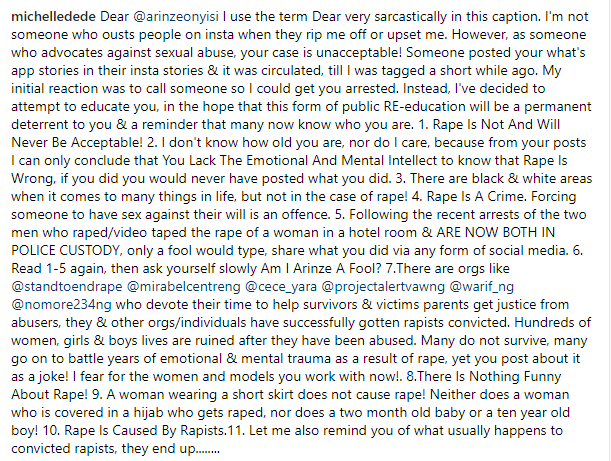