Here Are The Celebrities Who Lost Their Homes In The...

The Woolsey Fire raged across counties last week, leaping into the celebrity enclave of Malibu.

UPDATED at 6:30am PT on November 13, 2018: Ireland Baldwin posted on Twitter that her mother, Kim Basinger, was among those who lost their homes. She also tweeted that she was accused of being a looter by police while trying to go to her own house.

“An officer at a back way entrance to one of the main canyons that take you over to Malibu stopped us and refused to let us in because I don’t have my Malibu address on my ID,” she wrote. “Not only was he a dick, but he had 0 compassion and he literally accused us of being looters and threatened us that we were going to be arrested if we kept giving him trouble.”

She added that she understands he was just doing his job, but pleaded for “compassion.” She added, “So many friends and friends and family of friends are losing everything they own in these fires. My mom and her partner lost their Malibu home in the #Woolseyfire and thankfully, they are both safe.”

Both Liam and Luke Hemsworth shared new photos of the destruction on their properties as well on Tuesday, after Miley Cyrus revealed her and Liam’s home had burned down on Monday.

The massive wildfires consuming large swathes of land across California have forced hundreds of thousands of residents to evacuate their neighborhoods, including some celebrities.

Gerard Butler, Miley Cyrus and Liam Hemsworth, Neil Young, Robin Thicke, and Camille Grammer are among those who have lost their homes to the blazes.

The Woolsey Fire raged across counties last week, leaping into the celebrity enclave of Malibu. The blaze has so far torched 85,500 acres of Los Angeles and Ventura counties, claiming over 170 structures. As of Sunday it was only 15 percent contained.

Sunday morning, Gerard Butler posted a photo to Twitter of the charred remains of his Malibu home. In his note he thanked firefighters for their valiant efforts.

“Returned to my house in Malibu after evacuating,” the actor wrote. “Heartbreaking time across California. Inspired as ever by the courage, spirit and sacrifice of firefighters. Thank you @LAFD. If you can, support these brave men and women at http://SupportLAFD.org.” 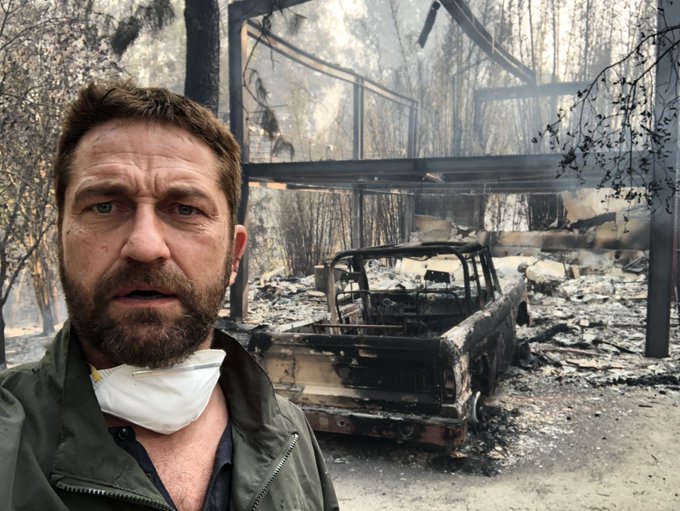 Returned to my house in Malibu after evacuating. Heartbreaking time across California. Inspired as ever by the courage, spirit and sacrifice of firefighters. Thank you @LAFD. If you can, support these brave men and women at http://SupportLAFD.org .

17.9K people are talking about this

The Scotsman later clarified that his home was only “partially destroyed.” In a series of Instagram videos posted on Monday, Butler showed the smoking ruins of his neighborhood in Malibu.

In the accompanying note, he wrote: “Driving around Point Dume on Saturday. My heart aches for all those who lost their homes and their lives in California. I was one of the lucky ones, my home was only partially destroyed. A lot of people lost everything and will have to rebuild from scratch. I am ok and so grateful for all of the well wishes. Please turn your support to those who need it most here, and throughout California. There’s a Go Fund Me to help people across the state affected by the fires. Please join me if you can. gofundme.com/cause/californiafires.”

In his videos, the actor is visibly emotional as he documented the damage done to his neighbors’ homes.

Cyrus posted her own note, writing on Twitter: “Completely devestated by the fires affecting my community. I am one of the lucky ones. My animals and LOVE OF MY LIFE made it out safely & that’s all that matters right now. My house no longer stands but the memories shared with family & friends stand strong. I am grateful for all I have left. Sending so much love and gratitude to the firefighters and LA country Sheriff’s department!”

The pop star then directed fans to where they could donate supplies and money to help those affected by the fires.

Completely devestated by the fires affecting my community. I am one of the lucky ones. My animals and LOVE OF MY LIFE made it out safely & that’s all that matters right now. My house no longer stands but the memories shared with family & friends stand strong. I am grateful for

25.4K people are talking about this

Young posted to his website, noting the devastating effects of climate change: “I have lost my home before to a California wildfire, now another.”

Robin Thicke’s home was destroyed after he evacuated his family. He thanked firefighters in an Instagram post for their efforts to save his house: “As we drove to safety, they risked their lives trying to save our home.” While his girlfriend posted to Instagram Stories, notifying her followers: “Our house is gone”.

Grammer wrote on Instagram Sunday: “Sadly my house couldn’t be saved. The courageous firefighters were able to save my cars and personal items recovered from my home. I thanked the fire chief and his team of firemen for all of their hard work. He took the time to explain what happened and I’m grateful for all of their hard work trying to save my home. Sad we lost our home but grateful that my family is safe. Luckily we quickly evacuated our house yesterday after a patrol car drove up the street announcing mandatory evacuations. I’m grateful for my lovely neighbors and friends who kept me informed and for their help this evening. Thank you all for caring #woolseyfire #malibu. Special thanks to Fire Chief Rash and his brave team of firefighters.”

Martin Sheen and his wife Janet were found at Zuma Beach late Friday night by Fox11 News. The couple had a message for their children, who they were unable to get a hold of after they evacuated.

“We’re just fine,” Sheen said to the camera, before addressing his children by name, “Emilio, Ramone, Renee, Charlie, we’re fine. We’re at Zuma Beach. We’re probably going to sleep in the car tonight. We’re just fine and hope you guys are, too.”

Earlier that day Charlie Sheen had posted to Twitter asking fans for help in locating his parents: “I cannot get ahold of my parents, Martin and Janet Sheen. They are in the group, at the staging ground near Zuma Beach. If anyone has eyes on them, please let me know that they are safe and sound in the middle of this horrific scenario. Thank you in advance.”

“Doctor Strange” director Scott Derrickson lost his home. “We lost our home, but we are all safe and that’s the important thing,” he tweeted Friday morning. “Gonna be offline for awhile.”

Just a quick update to say that I’m overwhelmed by the incredible outpouring of love and support. Thank you to everyone who messaged me, and for the dozens upon dozens of you who offered us a place to stay. We are blessed and grateful to be safe and so loved.

477 people are talking about this

Iconic landmarks in the LA area were also destroyed, including Paramount Ranch, a popular film set in the 1930s which has recently risen back to prominence with HBO’s “Westworld.”

Meanwhile, Caitlyn Jenner let fans know her home did not burn down despite early reports claiming she had lost her Malibu residence.

“It was devastating out there in Malibu. You can see the hills are just totally scorched,” Jenner said in a recent social media video. “We’re very, very lucky.”

Kim Kardashian had to evacuate her family after the fire marched towards her home in Calabasas. Lady Gaga, Kourtney Kardashian, Khloe Kardashian, Orlando Bloom, Jessica Simpson, Tori Spelling and many more stars were forced to evacuate.

Spelling and her family of seven found refuge with her former “Beverly Hills, 90210” co-star Jennie Garth.

See below for some of their social media updates. 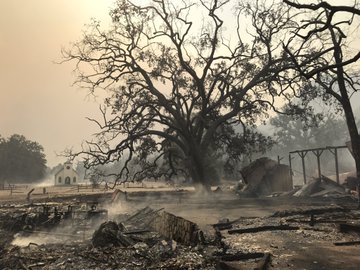 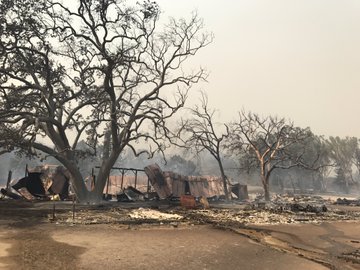 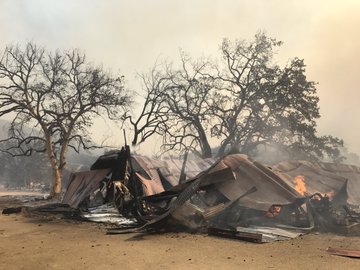 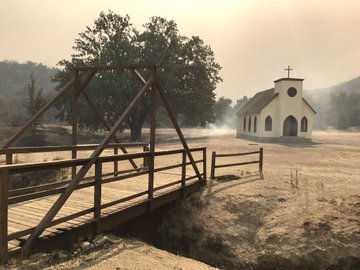 Sad for fans of @WestworldHBO and shows like Dr Quinn Medicine Woman, the Paramount Ranch western town movie set has burned to the ground in the Woolsey Fire @CBSLA #westworld #Woolseyfire

4,075 people are talking about this

I am thinking so deeply for everyone who is suffering today from these abominable fires & grieving the loss of their homes or loved ones. I’m sitting here with many of you wondering if my home will burst into flames. All we can do is pray together & for each other. God Bless You.

22.7K people are talking about this

Meanwhile, Lady Gaga made sure to show support for her neighbors by visiting a Red Cross shelter in Pacific Palisades for displaced families on Sunday evening. She shared a message of unity, while encouraging survivors to reach out to each other and use the mental health resources available at the shelter.

If you want to help you can donate to the following places: