It appears that Nicki Minaj was telling the truth about turning down an offer from shoe designer Steve Madden before her rival Cardi B was approached with the deal.

The rappers exchanged a series of insults and accusations on social media on Monday, and in one of Nicki’s post she revealed she turned down an offer from Steve Madden, who Cardi partnered with for a series of ads at the end of last year.

Steve Madden later took to Twitter to accuse Nicki of lying about a deal that was never offered.

Now controversial rapper, 50 Cent has shared a screenshot of Madden’s 2015 Vibe interview, in which the designer spoke about a would be Nicki collaboration.

The Interview read: “Another rapstress who could have collected a check from Madden and ironically, Iggy’s foe? Nicki Minaj. “I was gonna do a collaboration with Nicki Minaj and we got into a fight the first minute we met,” he recalls, without pinpointing the exact cause. “And then we patched it up. We were cool. We text each other, we became sort of buddies. We were thinking of doing something, and I would’ve, but I was with Iggy and I thought, ‘Coke and Pepsi.’ It was a mistake. I made a mistake and I wish that I could go back in time and work with Nicki instead of Iggy.” 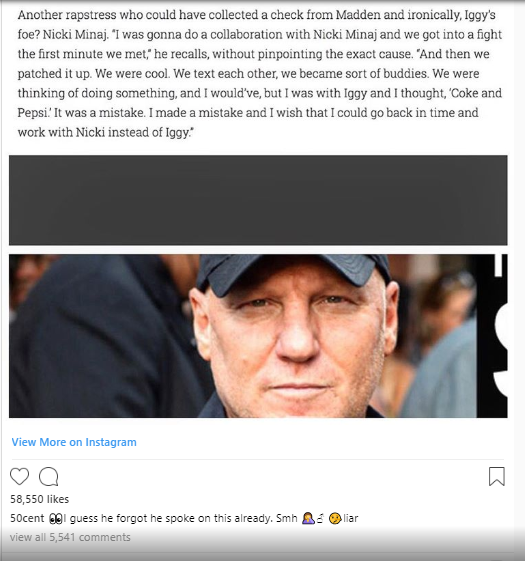 Even Iggy Azalea also weighed in and confirmed Nicki was telling the truth. She also called Madden a liar. 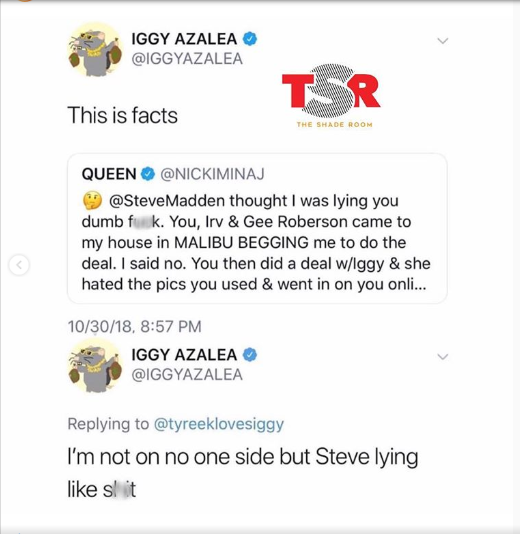 In another tweet, Nicki blasted the fashion designer. She wrote: ‘? @SteveMadden thought I was lying you dumb f**k. You, Irv & Gee Roberson came to my house in MALIBU BEGGING me to do the deal. I said no. You then did a deal w/Iggy & she hated the pics you used & went in on you online. Im sure Irv told you to post this lie. Respond to @50cent 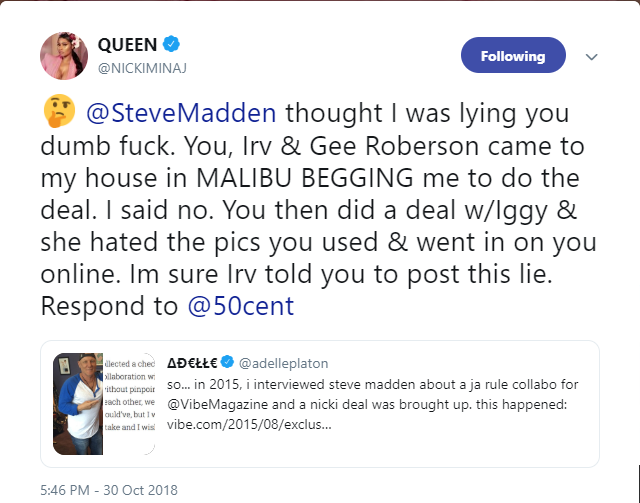