Actor John Dumelo called out for holding waist of University...

John Dumelo has been called out by Twitter users after he was pictured holding the waist of a student of the University of Ghana.

The popular actor, who was recently elected NDC parliamentary candidate for Ayawaso West Wuogon, shared photos of himself and some students from University of Ghana during their matriculation last Saturday on his Twitter handle.

He captioned the photos: “I interacted and took over 2000 pictures with freshers of the University of Ghana during their matriculation yesterday. Even though the time was limited I thank you all for showing up.” 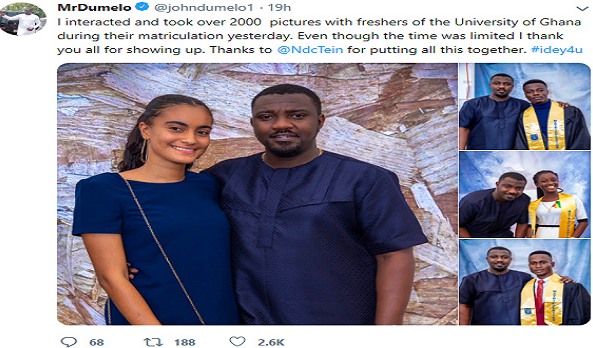 But Twitter users felt one of the photos was inappropriate because he place his hands around the waist of a female student and they slammed him for being “gross and predatory”.